We would like to introduce you to the inspirational Jon Summers. Jon is our newest Nokkon ambassador recruit. Jon has a long history of selflessly supporting others health and now working together with Nokkon, we are aiming to help contribute to spread Jon’s positive influence farther #thenokkoneffect. When we asked him to contribute to his bio his modest response was “I find myself humbled by the invitation to join Nokkon as an ambassador. All I want to see is people achieve their potential and lead extraordinary lives.”

Jon: I lead quite the hectic lifestyle, juggling a start up business, working FIFO, working casually as a Paramedic when I am back in Melbourne and then there are the trips for my sanity. My feet don’t long hit the ground before I am off somewhere on my RnR.

Nokkon: What activities/interests in the health and wellbeing sector do you have?

Jon: I have played Rugby League, Rugby Union, Water Polo, Bodybuilding and go ok on the Concept 2 Indoor Rowing machine. I have been lucky enough to play in England, Scotland, France, Wales, New Zealand and Australia.

Whilst playing school Rugby Union in Brisbane, it was at this stage that I developed an interest in diet and body, how it works. It has only been the last couple of years that I have really taken a vested interest in health. Two years ago I was 134kg, and was turned away from a flying fox in Thailand. That was my crossroads, I still remember the disappointed look on my then wife’s face when I was told I could not do it. Broke my heart.

Nokkon: What benefits have you found in your active lifestyle?

Nokkon: Who are your inspirations?

Jon: Richie McCaw has go up there as one of the greatest sportsmen ever. He is a role model of note. Zig Ziglar, Anthony Robbins, Jim Rohn. It was at Unlimited Power Within (London UK) with Anthony Robbins that changed my life at 25 years old. And the tickets were completely free.

Nokkon: How do you ensure you positively influence others?

Jon: Zig Ziglar says it best “You can have everything in life you want, if you will just help enough other people get what they want.”

Nokkon: Do you have memorable health highlight for yourself? 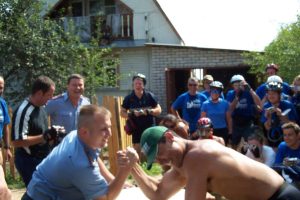 Arm wrestling a russian police officer in the middle of town whilst riding across Russia for Cerebral Palsy, SCOPE. He near tore my arm off, national sport it is!

Nokkon: And one for someone you have helped?

Jon: Helped my friend lose 20kg while out at work, 3 swings I believe.

Nokkon: Your slogan or moto when it gets tough?

Jon: “Persistence is the ability to overcome all obstacles between me and my goals!”.