On Sunday 13th November our Ambassador Sarah Penny lined up at the start line of her first middle distance endurance triathlon, the Hervey Bay 100km. The events leading up to this day included, work, looking after the kids, gruelling early am training sessions, a bike crash, injury and an ongoing mental battle with her self-doubts. None-the-less she managed all these factors to get her to this point, eagerly awaiting the pop of the start gun….. 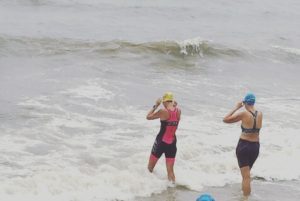 Sarah Penny: “7:34am on the clock, the best yet hardest day ever began. It was the Hervey Bay 100km. A 2km swim, 80km ride and 18km run. 13th of November will be a day I won’t forget, as it was my first endurance triathlon, and my second ever triathlon.

The 2km swim felt horrendous! It was only my second ever open water swim and it was just brutal. The water intake and swimming in the washing machine had me in tears.  I came out of the water cursing as if i had sailed it rather than swam it. As i hit the beach, I stumbled upon Emma and Steve from south bank tri club. The swim was so mentally and physically taxing I collapsed into Emma’s arms and burst into tears. With a few motivational words from Emma and Steve, they had me back on track and prepared to take on the ride.

The ride was 80km and the road conditions were less then ideal due to 1.1km of road works. The road’s asphalt had been stripped, leaving a rugged, uneven, exposed limestone surface. The race officials had imposed a 400m no pass zone for safety reasons. The terrain took its toll on the TT bikes tyres. With an abundance of people sidelined with flat tyres and left waiting for help. I had to take evasive action as the racer in front of me lost her water bottle, when it bounced loose from the bumps. 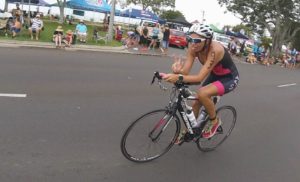 I had started to make up time on the bike and was expecting a 2hr 45min ride. I was making great progress and tracking well until the climb at the short, sharp hill on the 3rd lap 55km mark. I didn’t change up gears and took the hill at too low a gear, causing me to lose balance and hit the deck. I lost skin off my elbow, thighs and was dazed by the hit. In what seemed like a couple of seconds, an amazing spectator came to my aid, helping pick me up, walking with me to the top of the hill and helped straighten my seat and handle bars. Bruised and battered, I thanked the spectator, climbed back on the saddle and continued on the course back into town. At the next aid station, I found my support crew and chief. They knew something was up as i was shaking my head in disappointment. I burst into tears as i told them what happened and showed them what I had done, preparing to get off my bike (named “Lucky”) and throw in the towel. They literally held me on my bike and said “You’re not stopping. That’s not blood”, and after a quick wash down, sent me on my way. The ride was windy and getting warmer as the race drew on, taking its toll on my stamina. 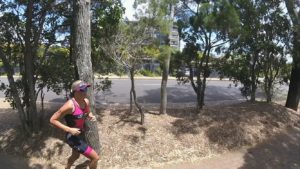 I headed into the 18km run, managing to get out 4kms before the conditions became too much. I broke down again and cried. I couldn’t breathe, everything in my body felt like it was tightening, I wanted to stop for a DNF (Did Not Finish). Again wise words came from my chief support man’s lips, who told me to “breathe, take my time and continue on or that my backside would be dragged over the finish line. I hadn’t been driven 3hrs for you to quit now”.

I spent the run changing between running and walking. I would run a km, pick a point then walk a bit and push on again running. It was incredibly hot and muggy, and I think I tipped more water over my head than I drank. I made sure I drank water and ice at every aid station. The hot coke was just foul…  but it gets the job done when you need that extra kick to get home.

Once I had the finish in sight there were lots of fun jumping for photo shots. I figured why not, it 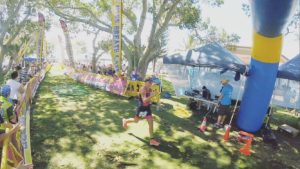 was always just about finishing and now had a chance to enjoy the final moments.
I rounded out my first hundy experience in 14th place for my age group, 98th in overall female individuals in 6hrs 22mins 25secs. I’d like to do better, but I did it and finished. I guess what it is to me is still sinking in. The 100km of demons and laughs or as I would like to say… swimming drowning, riding, stacking, running jumping. I’ll be back next year to suffer in paradise!!!

I would like to give a huge thanks to the hundy heroes out on course. You are all legends and to Jeff Morris you pulled out a cracker of a day along with Hervey Bay tri club. An amazingly well run event.

Now its time to recover; set new goals and spend some much needed time with family x”