What is a breathing pattern?

Breathing pattern is the rhythmic, repetition of inhaling and exhaling used when we run.

Why does Breathing Pattern matter?

Breathing pattern is important because as our muscles begin working harder during running, our metabolic rate increases, which means our muscles demand for oxygen also increases. Our muscles need more energy, so production of the chemical energy molecule ATP (Adenosine triphosphate- a molecule that transports chemical energy within cells for metabolism) increases. We need oxygen to produce ATP, so the more ATP you produce, the more oxygen your body requires.

When we run at a comfortable pace we may be able to deliver ample oxygen with no particular breathing pattern required to sustain our running. However when we exceed the ability to hold a conversation at pace and enter threshold running, this is where we will best see the benefits of rhythmic breathing.

Since the delivery of oxygen to our muscles begins in our lungs, as our demand for oxygen increases during exercise, our lungs must work harder. With a faster breathing rate/more efficient breathing pattern, more oxygen is picked up at our lungs for delivery to the working muscles through our bloodstream, resulting in a more sustainable exercise intensity.

Budd Coates author of “Running on Air: The Revolutionary Way to Run Better by Breathing Smarter”   advocates that rhythmic breathing can also help runners avoid injury. Budd describes a technique of breathing that can better manage fatigue and energy forces used when we exhale and land on the same foot. This is described in the following runners world article “running-on-air-breathing-technique“. The technique utilises breathing patterns such as a; breathe in for 3 count and breathe out for 2 count. This odd number pattern ensures that we exhale on alternating foot strikes as we run. So we never continually exhale on the same foot, and we now share the stress and energy use to alternating sides of our bodies. 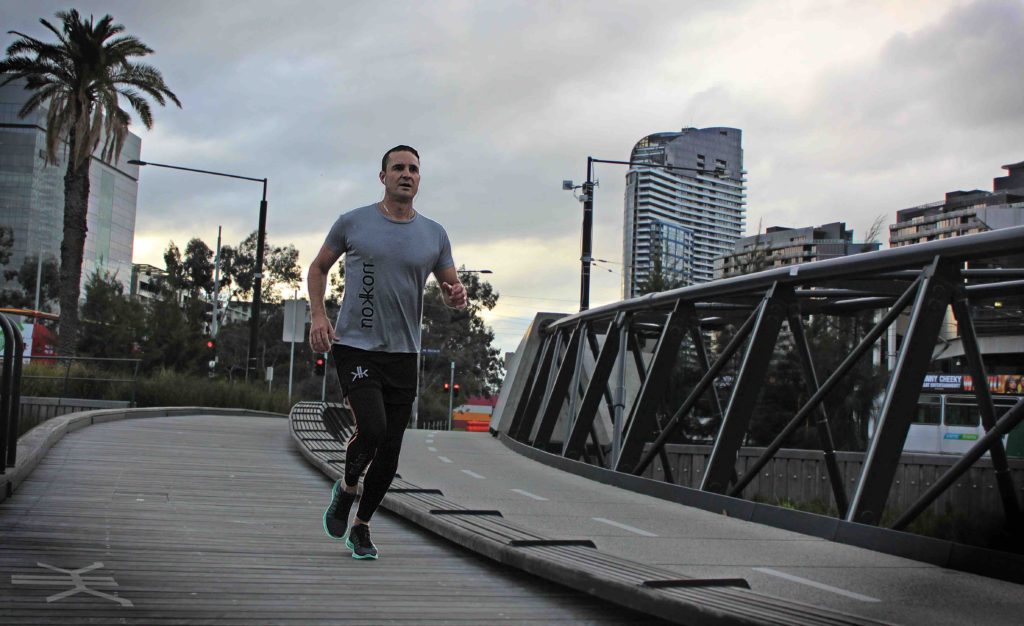 Some tips for working on your breathing patterns are:

Chris Wright: “As i started to push myself in my running I found it increasingly difficult to sustain my pace at threshold. My legs would fatigue and it would take a lot of focus and energy to continue with my heart rate going through the roof. After changing to a rhythmic breathing pattern which was in time with my cadence, I could not only sustain my pace but accelerate later. Looking at my heart rate stats it showed that when i settled into this technique my HR would actually drop a few kms into my runs without my pace dropping.  When I use breathing patterns I feel more balanced and calmer and I can focus on achieving my cadence or making other form adjustments.”

Stay tuned for our next Running Form blog on Shoulder position/tension.