We love our technique and training tools and lately we have spent time researching running sticks. We were keen to see how they work and the effects they have on the runner. The theory is you run with short, wooden dowels (approx 10cm long, similar width to a broomstick) in the palms of your hands with thumbs over the end of the sticks. 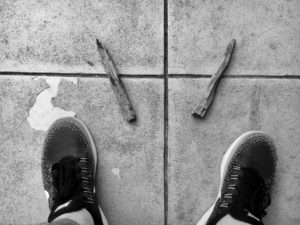 When running with them in your hands it is meant to aid in keeping your arms by your side, and minimising twisting arm movements. We set the challenge for our ambassador to do 10km using running sticks. Read below on how our guinea pig ambassador Chris Wright went on this #techniquetesting challenge.

Chris- “When nokkon put this to the ambassadors I was really interested to try. I used to and still occasionally do have a twisting left hand when I run, particularly in severe fatigued states or when zoning out. My left hand turns inwards and downward in a scooping manner, my hand moves more across my body rather than forward to back. It’s almost looks like a movement from a bad freestyle swimming stroke. I have also recently been watching my left foot strike and movement. 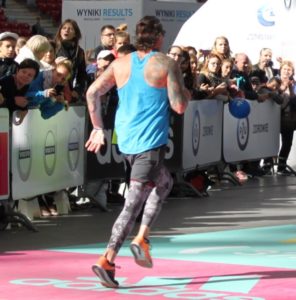 I noticed that I had a relationship between my left arm/hand movement and the twist and pronation of left foot. If my hand curled in and under, my foot would too. If i tried to adjust pronation/foot strike my arm and hand would twist. So to try these running sticks I could look at gathering more information on how I move, if there is benefit in change and a strategy to work on this change. 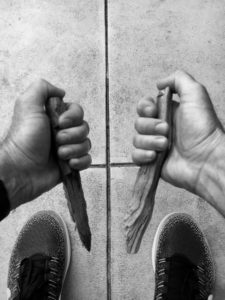 I was meant to go to the hardware store and make up 10cm wooden dowels but instead I improvised when I saw a couple of sticks on the ground, that had one blunt cut end, weren’t too sharp and didn’t have any splinters. I picked these up and put one in the palm of each hand, with my thumbs resting on the top and all fingers gripping them lightly. It kind of looked like what you would imagine if some one was about to plunge a wooden stake into the heart of Dracula. I made sure I had my arms at 90 degree bend and tucked in by my side and set off at about a 4.30 min a km pace. I found I didn’t need any conscious effort to maintain a constant and straight swing. Arms and hands were straight in line and my thumbs were forward facing as if was steadily drumming in a marching band. This all tracked well. It was about the 8km mark of my 10km run where i was starting to fatigue. This was where i was expecting to see the most impact. At this point, there were a few small undulating hills and my cadence and pace dropped, so I applied some focus on the sticks and driving them faster, which helped my cadence to pick back up. For the next km and a half, I increased intensity to 4.00 min a km to see how the sticks influenced my movement at pace, again focusing on driving them down and back parallel to my body, finishing my run in a sprint.

I felt that at a faster pace I naturally drove strongly with my arms, so the sticks were not as useful during these periods. I was also quite self aware during these periods too so i paid more attention to how my body was moving and naturally drove with my arms. The biggest benefit I had was when cruising along below threshold pace, where i was less self aware and my mind drifted off, thinking about other things. During this period carrying the sticks helped keep my hand and arm movement straight, without twisting and I did not need focus to maintain this movement.

I do recommend trying this to see the cause and effect of upper body and lower body movement relationships. If you chicken wing, arm/hand twist this may be a beneficial progressive tool to use in your training if you are wanting to straighten up and bring in a tighter upper body movement. I’d like to try again on an easier, more efficient pace to see if there is benefits on a run where I am not as focussed on movement. I think there may be more benefit in efficient, easy long running.”

nokkon- Remember our running mechanics can be personal and individual. With many varied contributing factors as to why we move in that manner. Changes in movement should be low impact, gradual, progressive and always in consultation with a health movement specialist.